S.Y. Agnon (1887-1970) was the central figure of modern Hebrew litera­ture and the 1966 Nobel Prize laureate for his body of writing. Born in the Galician town of Buczacz (in today’s western Ukraine), as Shmuel Yosef Czaczkes, he arrived in 1908 in Jaffa, Ottoman Palestine, where he adopted the pen name Agnon and began a meteoric rise as a young writer. His works deal with the conflict between traditional Jewish life and language and the modern world, and constitute a distillation of millennia of Jewish writing – from the Bible through the rabbinic codes to Hasidic storytelling – recast into the mold of modern literature. Agnon was Israel’s first Nobel laureate and remains the only Hebrew author to receive the prize in literature.

The Agnon House in Jerusalem is a National Heritage Site, dedicated to the work of the writer S.Y. Agnon, the 1966 Nobel Prize in Literature laureate. Agnon and his wife Esther built this house in 1931, and he lived here until his death in 1970. The house is now a literary museum and a venue for tours, lectures, performances and workshops. The house is surrounded by cypress trees and immersed in greenery, a magical island in amidst the tumult of the big city. Visitors are welcome to see the writer’s home – to get to know his and his family’s life, to get a taste of his enormous body of work, to capture a glimpse of his study and to appreciate his unique contribution to contemporary Hebrew culture. The study on the second floor, where many of his best-known and most beloved works were written, including A Simple Story, A Guest for the Night, Only Yesterday and Shira, contains his enormous library of Biblical, Rabbinic and modern literature. At the end of the tour, one can rest in the lavish garden or dive into a book in one of the quiet halls. At the museum shop, one may purchase Agnon’s writings in Hebrew or in translation, a wide selection of scholarly works and souvenirs.

For inquiries in English about Agnon House or the writing of S.Y. Agnon, contact R. Jeffrey Saks, Director of Research, at [email protected] 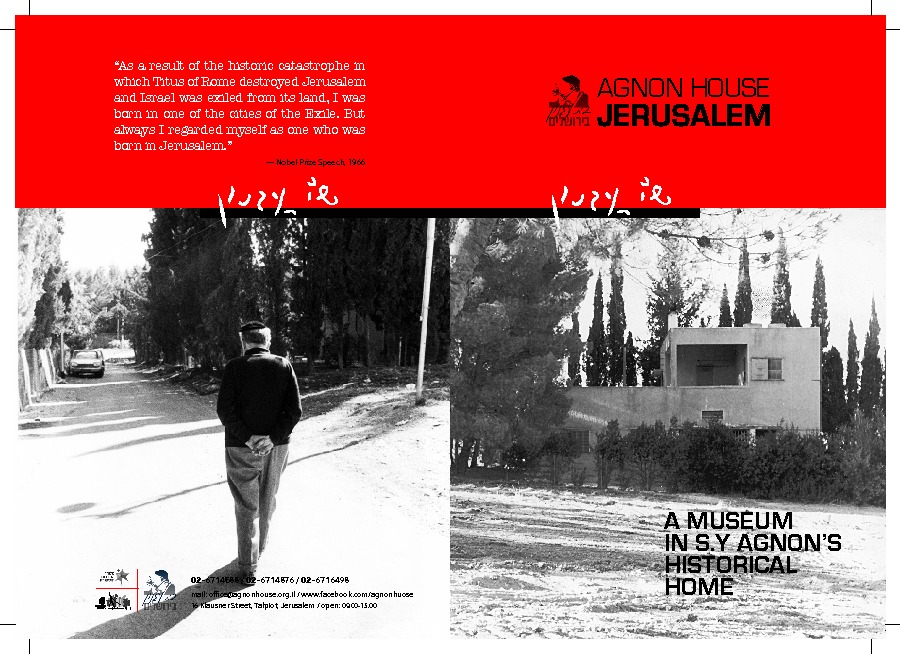