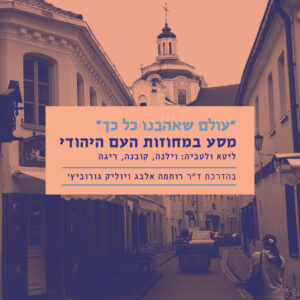 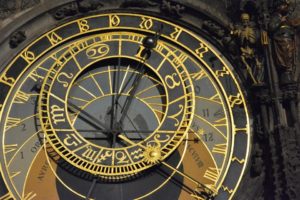 Experience the rich history of Central European Jewry in the setting where it unfolded. Walk in the footsteps of great Jewish leaders, writers, thinkers and rabbis, from the medieval period through the confrontations with modernity, and study their texts and ideas with our outstanding scholars and guides. All tours and lectures in English.

Sunday, July 12 (20 Tammuz) / Prague
Arrival in the Czech Republic and the enchanting city of Prague in the Czech Republic. After lunch and settling in at our hotel we begin our journey at the Prague Castle, one of the oldest and largest in Europe, and its panoramic view of the city. Enter the Old Town via the Charles Bridge, built in the 1300s; New Town Hall, adorned by a statue of Maharal of Prague; the beautiful Old Town Square of Prague is highlighted by the world’s oldest operating astronomical clock, from 1410, with its mechanical show on the hour!

Monday, July 13 (21 Tammuz) / Prague
The Jewish Museum of Prague campus is a combination of buildings and artifacts that is the largest collection of Judaica in the world from one geographic area. Highlights include a number of beautiful synagogues and the Old Jewish Cemetery of Prague, burial place of Maharal of Prague, Kli Yakar and other notables. Visit the Altneuschul (the oldest synagogue in Europe; hiding place of the Golem?) and the magnificent 19th century Spanish Synagogue, built on the site of the earliest known shul in Prague—itself a response to modernity. Discover the surreal side of Franz Kafka’s Prague. Free time for walking around the beautiful city and to explore the Old Town and Jewish Town in greater depth. Evening visit to the Black Light Show.
Tuesday, July 14 (22 Tammuz) / Prague, Lidice & Terezin
Excursion outside of Prague to the village of Lidice, site of the Nazi reprisal for the murder of Reinhard Heydrich, head of the SS Main Security Office and one of the architects of the Final Solution. Visit Terezin (Theresienstadt), the ghetto/transit camp for most of Prague Jewry and for much of the intellectual elite of German Jewry. It was also a “show camp” for the Nazis when the Red Cross came to visit. Return to Prague for dinner.

Thursday, July 16 (24 Tammuz) / Vienna
The Judenplatz, the center of Jewish life in the medieval period, with its exhibits on the important medieval Jewish community, including the archeological finds of the remains of the synagogue from the Middle Ages. The Judenplatz also contains Vienna’s Holocaust monument, a work of art to be studied and discussed. Walking tour through the heart of Jewish Vienna of the 19th and early 20th centuries, the home of Theodor Herzl, Sigmund Freud, Joseph Roth, Viktor Frankl, and many others.

Friday, July 17 (25 Tammuz) / Bratislava (Slovakia) & Budapest
Travel to Budapest via Bratislava, capital of Slovakia, visiting the grave of the Chatam Sofer, one of the most important rabbinic figures of the 19th century. Arrive in Budapest with a panoramic view of the city from the Fisherman’s Bastion and the Buda Castle, with a short visit to the site of the medieval synagogue. Ride the funicular down to the iconic Chain Bridge that spans the Danube. Prepare for Shabbat.

Shabbat, July 18 (Parshat Matot-Masse) / Budapest
Shabbat services in the beautiful Kacinczy Street Synagogue and meet with local members of the Jewish community. After Shabbat lunch and time to rest, we will do a walking tour of the 7th District, Budapest’s historic Jewish Quarter, once home to a community of 200,000 Jews. This area was also the ghetto during the Nazi occupation. We will see the newly renovated Rumbach Street Synagogue, the birthplace of Theodor Herzl, and the houses, courtyards, and memorials in the area. Lecture on the ideas of Theodor Herzl, comparing and contrasting him with other modern Zionist thinkers and writers.

Sunday, July 19 (27 Tammuz) / Budapest & Visegrád
Our day begins with a tour of the largest synagogue in Europe, the famous Doháney Shul. Encounter the heroism of Channa Szenesh. We will journey outside of Budapest to the pastoral “Bend in the Danube,” where we will be able to enjoy the beautiful scenery. Return to Budapest with free time to explore the city, visit the Great Market Hall, or soak in one of the famous thermal baths. Evening boat cruise on the Danube River.

Monday, July 20 (28 Tammuz) / Budapest
Our day begins with a tour of the Hungarian Parliament building, one of the iconic structures along the Danube River. Not far away is the “Shoes Along the Danube Memorial,” commemorating the murder of Budapest Jews by Hungarian fascists. We will then go to the new Holocaust Memorial Center, which tells the story of the stages in the destruction of much of Hungarian Jewry, the last major Jewish community conquered by the Nazis. There will be time to do last-minute errands and shopping before our Farewell Dinner.